En español
Repeal the Death Penalty in Georgia
“You shall love your neighbor as yourself.”-  Mark 12:31

This year, the Georgia Legislature is poised to take up House Bill 485.  If enacted, this bill would repeal the death penalty in Georgia and replace it with life without parole. The bill has the support of the Archdiocese of Atlanta, including Georgia Catholics Against the Death Penalty (GCADP) and the Georgia Catholic Conference. Furthermore, it is consistent with the teaching on the death penalty in the Catechism of the Catholic Church, reiterated most recently in Pope Francis’ encyclical Fratteli Tutti.
As Catholics, we uphold the dignity and value of all human life, even in the case of someone who has done great harm.
Repealing the death penalty would remove the risk of wrongful conviction and accidentally executing an innocent person.
Seven people have already been exonerated from death row here in Georgia.

The imposition of the death penalty is riddled with racial bias and unequal justice for the accused.  Georgia’s standard for proving mental disability is capital cases is the highest in the nation, risking sending people with mental disabilities to death.  In addition, millions of dollars are spent on capital trials, incarceration, and lengthy appeals. This money should be used for solving other crimes, investing in education to prevent crime, and providing more services to victims and their families. Georgia already leads the way with some of the nation’s strongest pro-life laws.  Now we need your support to expand that commitment.

Please take action TODAY, and go to www.gacadp.org/repeal to motivate your Georgia legislators
to ask for a hearing for this new bill #485, by signing the online petition.
You may also contact your legislators directly by phone, email, or
by using the sample letters (which you can personalize) provided at that website. 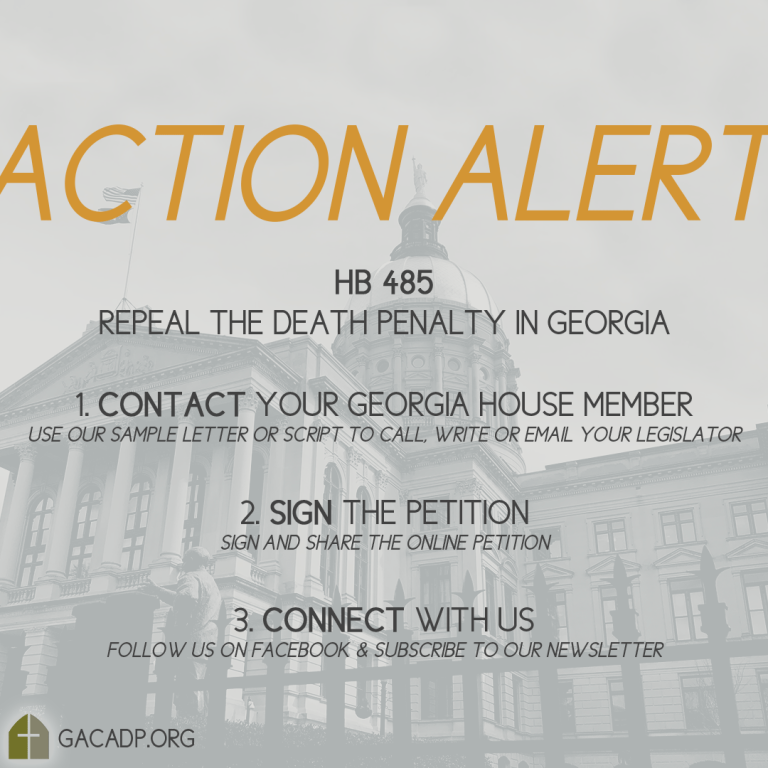